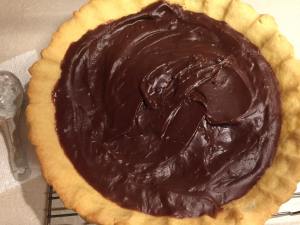 I Want Pie
When my son was helping to teach an adult evening class of English as a Second Language (ESL), he found the group largely consisted of women. Mostly moms whose children already spoke English, they now eagerly wanted their turn to learn as well. At the end of each semester a pot luck dinner was always held to celebrate, and Grant wanted to impress the ladies with our family’s favorite recipe of Chocolate Pie.

Teach Me
Once he sets his mind to something, it cannot be changed. Got anyone you know in your family like this? So, he approached dear old Mom and simply said, “I want you to show me how to make our chocolate pie.” I told him great, sure, anytime. But he meant now, for the dinner the following evening. Well, okie dokie then. And so we began…

Is that in the Recipe?
First, we went over the recipe because you always read the instructions before beginning any project, right?  The how-to part of the recipe was particularly skimpy because I’d received my grandmother’s recipe from my mother who basically assumed I’d need little actual instruction. Over the years, and due to my own mishaps, I mean experience, I’d added a couple of notes for myself for clarity. My son had question after question about the instructions and every time I explained something, he made me write it down on the card. He wasn’t taking any chances.

Lessons in Cooking
Everything you take for granted when handling food, ingredients, cooking utensils, and yes even bowls, should be thrown out the window when teaching someone from scratch, because they usually don’t know ANYTHING. Once you get past that realization, it’s all gravy from there. Unfortunately, I came to this insight late in the game.

First I asked him to assemble the ingredients and get out a large pan for the stove. Grant asked me what bowls we needed and I told him none, we assemble everything in the pan and then cook it. He looked at me aghast and said he wasn’t sure he was that sure of his skills yet. I gave him a long look, agreed, and had him retrieve a large bowl. It turns out he didn’t know where any of the ingredients were so Mom pulled these together while the son measured out what was needed.

Unfortunately, while he was measuring the dry ingredients into the bowl, he accidentally mixed up the cards between the pie recipe and the pie crust recipe and added a full cup of flour into the bowl.

The Big Idea
Anyone who’s made a pie knows how this will turn out, so I got this bright idea for him to learn a new lesson in how to fix the problem. Since the cup of flour was somewhat mixed with the other ingredients in the bowl but with a large portion still on top, he decided to look up how many tablespoons are in a cup. This way he could sort of back out his generous flour donation, leaving behind the approximate amount he should have originally added. The answer is 16 by the way.

The rest of the lesson went pretty well, with a bit of side fun when learning to break the eggs and separate the yolks from the whites. His crust came out perfectly and the pie looked good except for one thing. After he poured it into the crust and started to spread it out a bit, the pudding actually separated from the crust like some big chocolate ball of silly putty. Our eyes grew large at that astounding trick but in scraping the pan, we knew it was tasty so we shrugged and went on.

I Meant to Do That
All you can really do is hope for the best and if it turns out all right, act like you knew what you were doing and accept the praise. If it turns out all wrong, you have an amusing story to relate to women who’ve been cooking all their lives and will find you adorable anyway. But as it turns out, Grant’s pie was a big hit and everyone loved it. 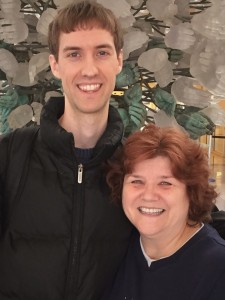 This entry was posted in Cooking, Family, Journal Post. Bookmark the permalink.