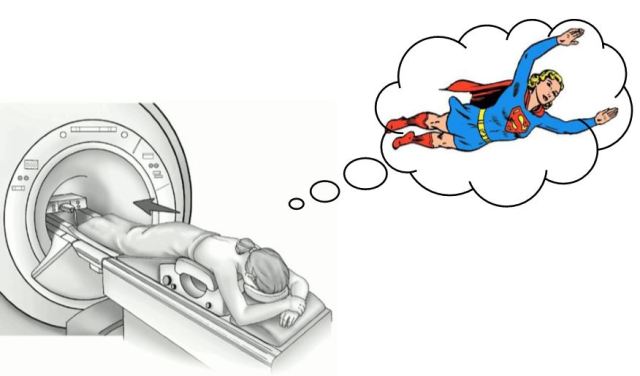 Following the removal of a precancerous growth, my Oncologist ordered an MRI for me. This way we could be sure there were no other cells left in there for removal. The idea of any further surgery was not a fun prospect. Leading up to the time for what was to be a lengthy test, I really wasn’t too worried. Really. After all, it’s just another MRI, and what’s one more MRI? I’d had one once before with last year’s concussion. Piece of cake.

A few day prior to the test, the imaging folks called me to remind me of my appointment, and to ask if I was claustrophobic. Well, yeah, sort of. I mean, does anyone really enjoy being shoved into a plastic tube with hugely loud noises suddenly bombarding your hearing for forty-five minutes? Get real. They recommended I get with my physician to prescribe something to relax me. Okay.

So, armed with the instructions to take my medication (one pill only) an hour prior to testing and to show up at 6:30 am at a location 45 miles away, I was all set. I activated an alarm for the appointment on my smart phone. On the night before, we set the alarm clock for 5 am (actually 4:45 because it runs fast), and tried to sleep. After some tossing and turning, I drifted off somewhere around 3 am or so. The next thing I knew, hubby was waking me up to get going. “What time is it?” I asked. “It’s 6:15,” he replied, “so we have to get going.” Holy moly. It seemed that someone kept hitting the snooze, and apparently I hadn’t heard a thing. Fortunately, the test itself wasn’t scheduled until 7:00, and 6:30 was for pre-work. However, I’d already missed out on taking my magic pill an hour ahead. Practically running out the door, I grabbed my meds and phone, barely remembering a sweater for the 45 degree weather.

We had a little trouble getting to the facility, having missed a couple of exits on our planned route, but finally got there a little after 7. It’s stressful enough to be here, and being late did not help. But, they were very nice about it and the only comment I got was that they’d have to “fast track” me since they were running behind. Not sure what they skipped on my procedure, but since I was already in “hurry” mode, I didn’t notice.

I was given the appropriate “attire” and led into the slightly scary imaging room, where I was asked to lie down, face down on what appeared to be a plastic plank. Fun. With my head resting on a cushioned donut hole, my claustrophobia was already kicking in. At this point, I was wishing I had taken two of those little calm-me-down pills instead of the one my doctor recommended. After mashing a pair of earplugs into my ear canals, I asked the attendant if they possibly had earphones with music. When I initially made my appointment, this option was mentioned to me as something that may help me relax a bit. After jamming the ear buds in my ears and directing me not to move for the duration of scanning, she asked if I had any quick questions. Yep. “Can I breathe during this procedure, or will I be asked to hold my breath?” (I had a test some time back where they asked me to hold my breath but never told me when I could release and breathe again – not fun.) “Also, could I swallow, cough, or talk?” I was told yes to breathing and swallowing, and no to coughing and talking. “Well, okie dokie,” I thought, “At least I could breathe. Now, if only I could get my breathing to calm down from panic attack-mode to slow and easy, maybe this would all be all right.” However, as she began to roll me into the capsule, my claustrophobia lit into full on “fight or flight”; only it felt more like: fight or flight? Flight! Flight! Flight! Also, although the radio idea didn’t work worth a flip, I’d still choose that option again since it provided a distracting sound for me to focus on, rather than the booming sounds the machine was emitting.

Luckily for me, instead of this crisp and efficient attendant, my actual technician turned out to be another young lady who spoke to me through the speakers periodically. She patiently described how long each imaging scan would run, when each began and ended, and then let me know when we were close to the end. It was her calm words that made the difference, and I made a point to let her know that when she pulled me out afterward.

After post-calm-me-down pill analysis, it turns out I panicked because I was placed into the same physical position as the very painful Cervical Epidural Steroid Injection I received a few months back. The result was sort of a muscle memory thing, anticipating a pain response that never came. So happy that’s over. Additionally, my hubby made sure to let me know he didn’t like how responded to my happy pill. It seems that when we kept missing our exits, I just chilled out and told him, “No worries,” as I checked the GPS, “We’ll just catch the next one.” Seems he was missing his type “A” wife, and his temporarily type “B” wife freaked him out. We are such creatures of habit.

A full week later, I phoned for my results and my doctor gave me the all clear, no cancer found, no more pre-cancer found. Feeling blessed.

In a last hurrah to my pre-surgery days, before I get rid of these gals my hubs suggested I send them off in style. Thanks for all the support ladies, but I’m glad to see you go. 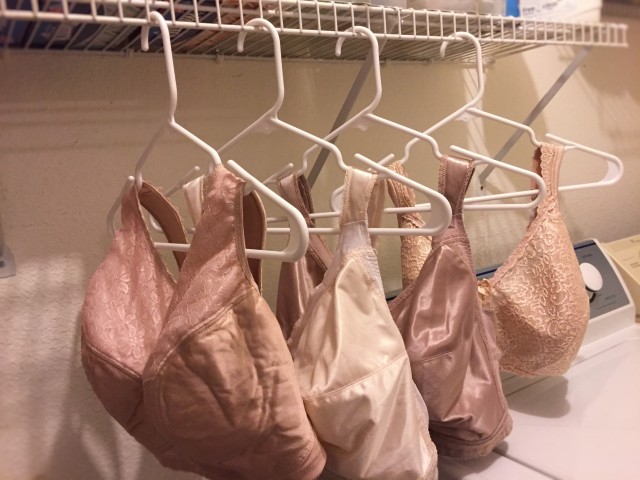 3 Responses to MRI = Must Run Immediately